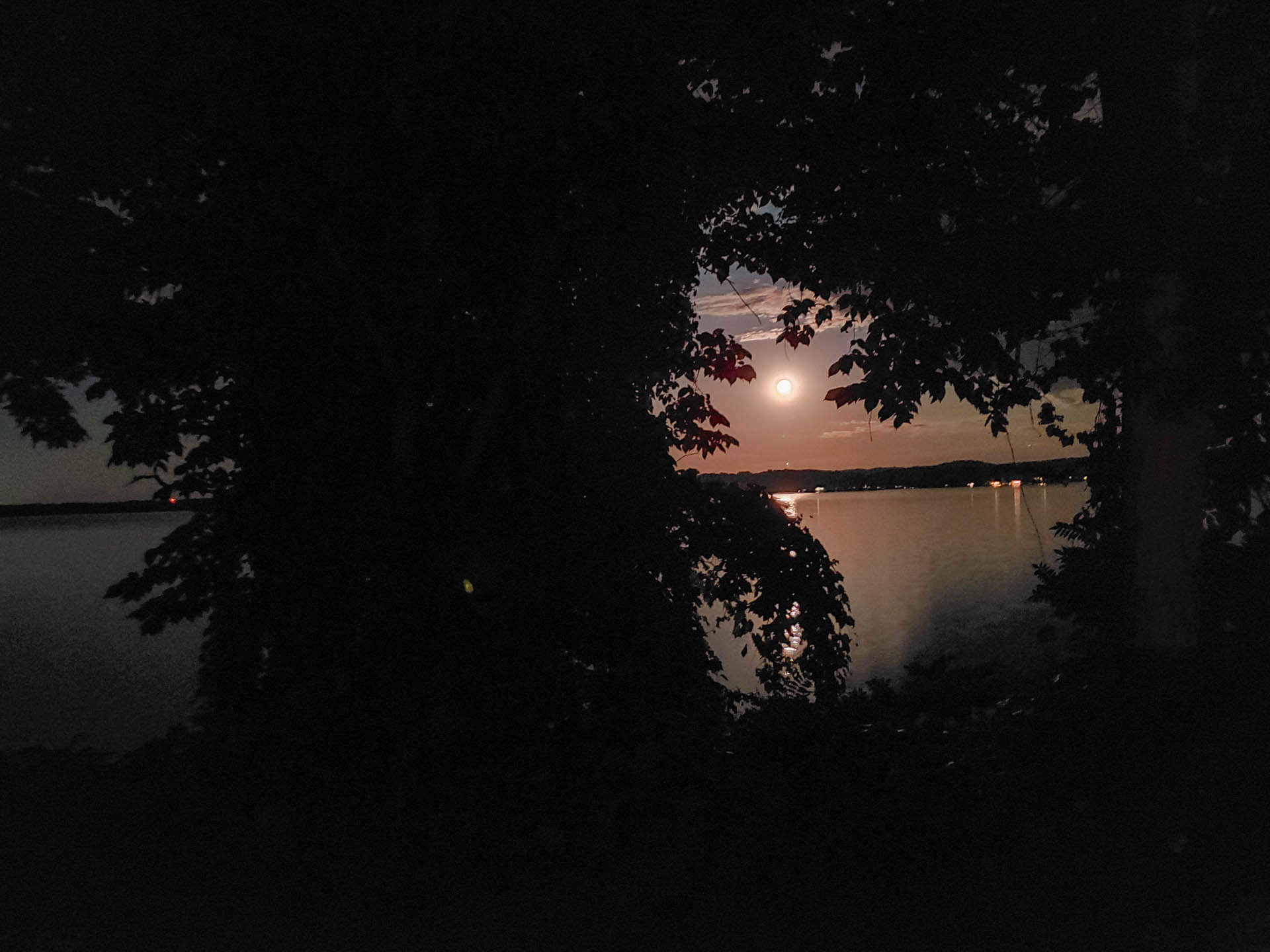 One reason we chose Interlochen State Park to camp at is because it’s the 100 year anniversary of Michigan state parks, and Interlochen was the first. It’s a pretty typical Michigan state park with campsites on lots of loops, with lots of trees. Our site was lakeside, on a bluff. There’s a nice view over Duck Lake. We had a water spigot out front, and stairs going down to a deck by the water, so we lacked some privacy, but it wasn’t too awful. The stairs, unfortunately, don’t go all the way down to the water.

We saw our first porcupine! Our neighbor pointed him out to us. He stood frozen in between our two campsites for a few minutes so we could check him out (though not too closely). Then he waddled away into the dark. 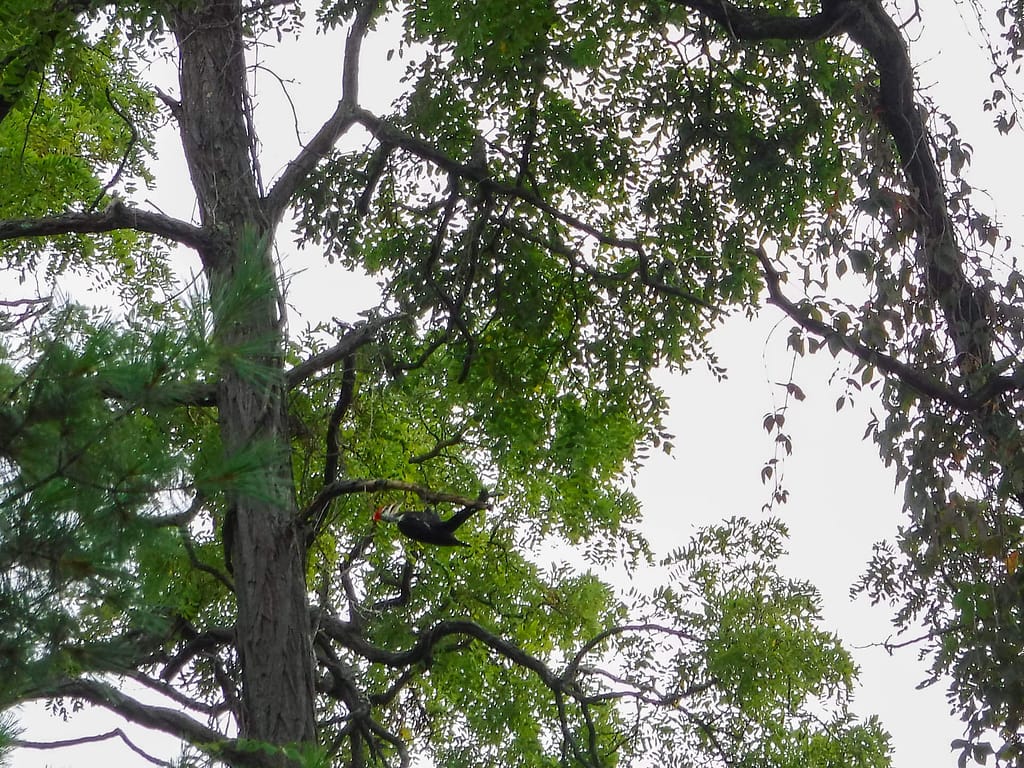 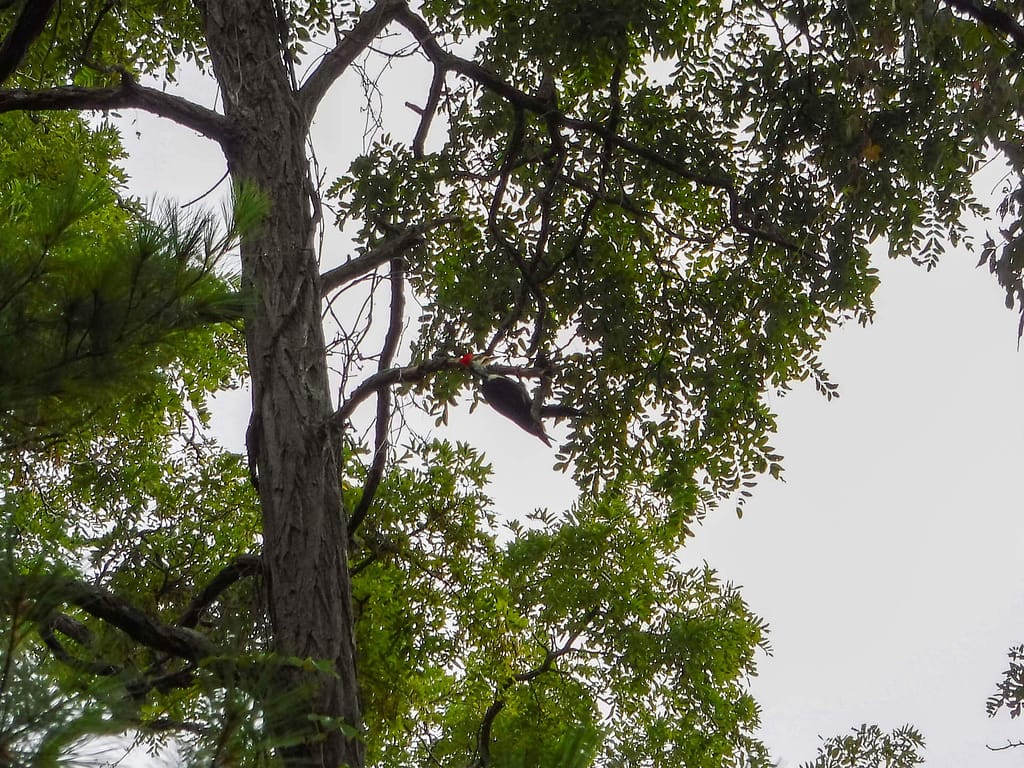 A pileated woodpecker also visited our campsite. It’s still a shock seeing a bird that large and colorful in our northern un-tropical atmosphere. 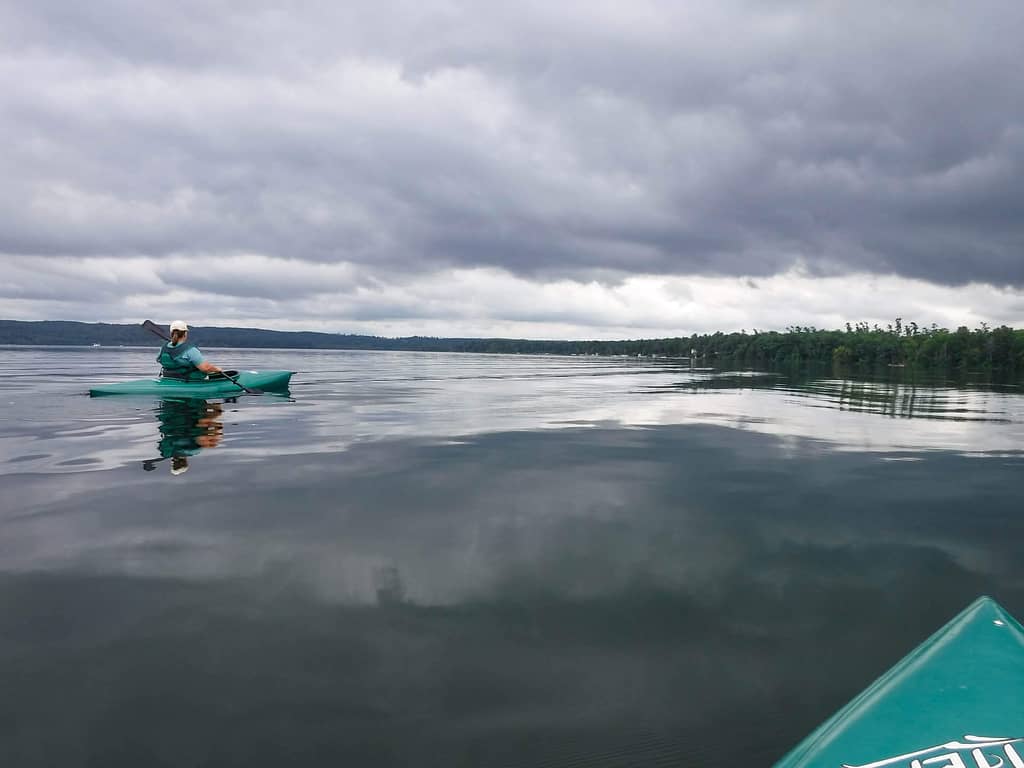 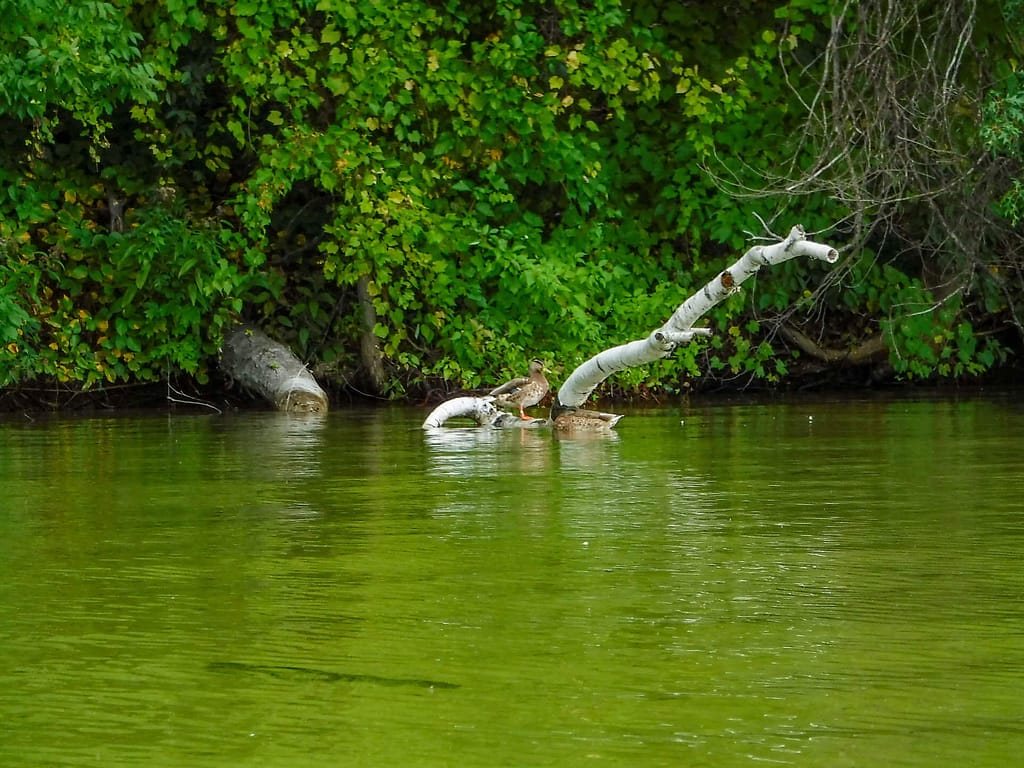 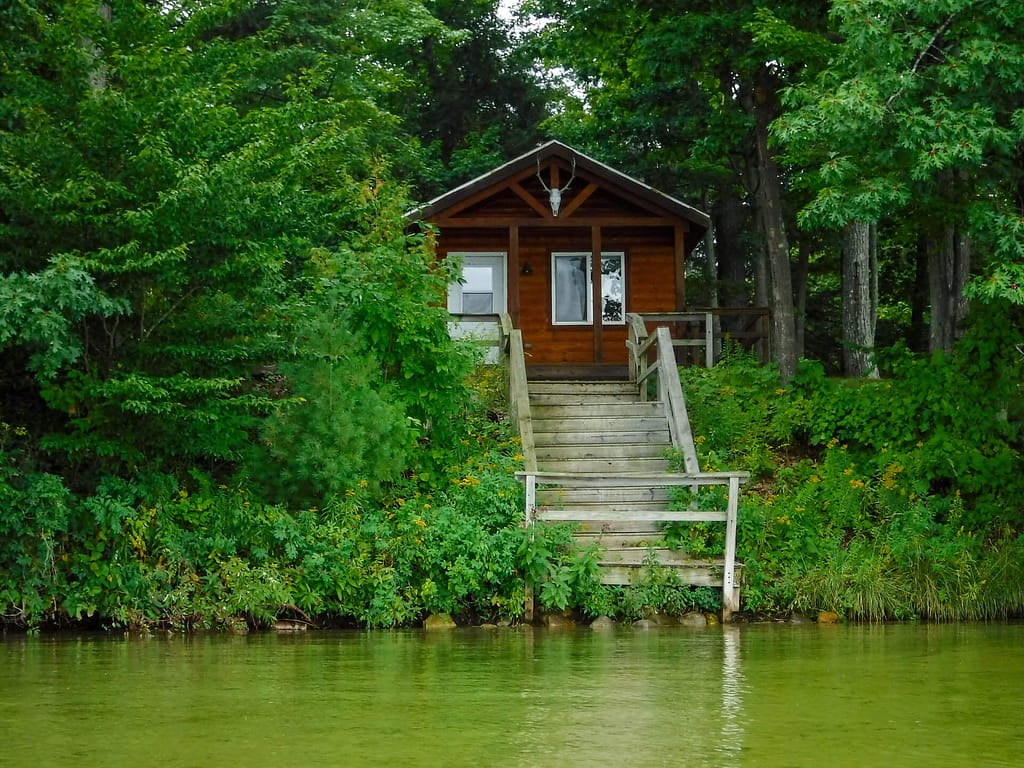 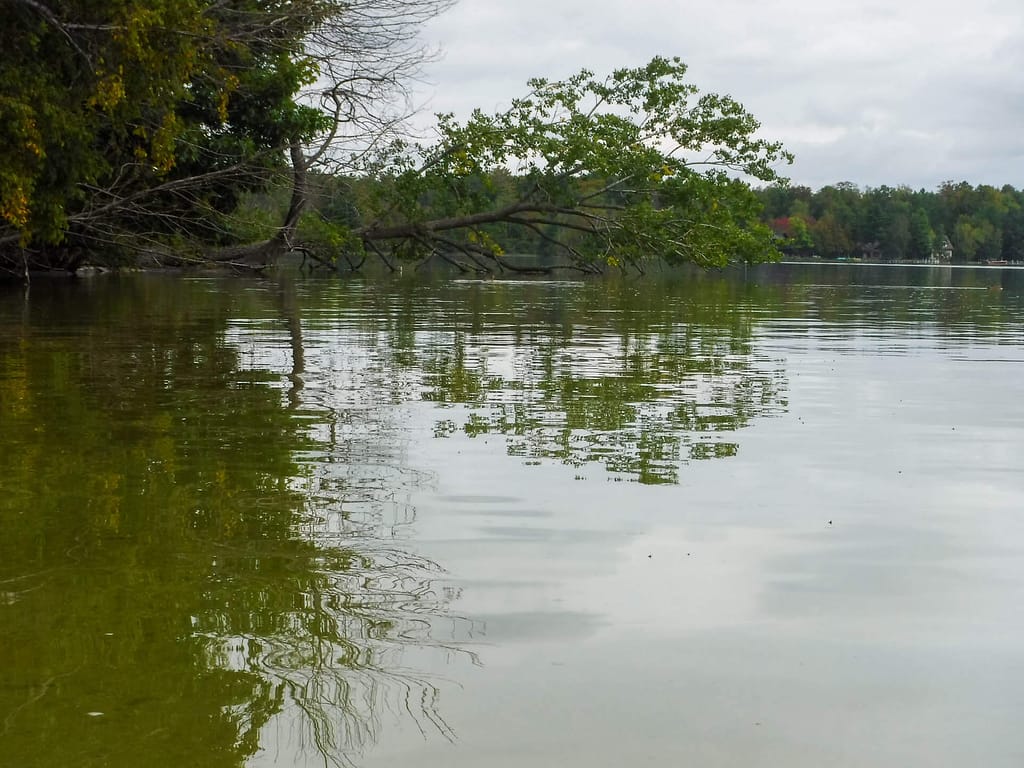 We drove over to the boat launch to launch the kayaks. It wasn’t a long walk from our site, but long enough to not do it while carrying the boats. Beware the slippery concrete boat ramp! I fell in the lake while trying to get in the kayak. Of course I had an audience. And forgot those water shorts would be transparent when wet! They have an interesting apparatus to help disabled people get in and out of kayaks or canoes. The lake was glassy smooth, the water clear, and the bottom sandy. It was also shallow quite a ways out from shore. We kayaked to the left first, down to a small cove, then went back past the main boat launch to the opposite side of the state park and beyond. We saw lots of ducks, some of which were diving. Also gulls and a couple of powerboats. No fish other than minnows near the boat launch. Lots of small opalescent snail shells. Peaceful and relaxing.

M-22 is so popular they’ve taken down the road signs so people don’t steal them. Our second full day in the area we spent checking it out. We took M-31 over to Lake Michigan, then cut west on M-115 to M-22 at Frankfort, on the shores of the great lake. We drove M-22 through Sleeping Bear National Lakeshore all the way up to the tip of the Leelanau peninsula, going out to the lighthouse and state park at the end. We then followed M-22 into Traverse City where we joined M-37 and took that out to the end of the Mission peninsula and back. It was a little foggy when we left; thankfully the fog cleared up and so did the clouds, so we could see blue water in Grand Traverse Bay rather than gray. We saw lots of cute little villages: Glen Arbor, Leeland, Northport, Sutton’s Bay. Also lots of orchards and grapevines, and more than a few wineries. One could easily spend a day or more checking out the shops and restaurants and tasting the wine. I’d made had a list of places on the Leelanau that made hard cider, but in the end we didn’t stop to do any tasting.

We went to North Peak brewing in Traverse City for dinner, including an Old Mission Porter and a seasonal beer, a spelt IPA with mango. Both were good. The porter was fairly bitter for a porter. We split a chicken quesadilla, which came with pico and an avocado cream. The quesadilla was hot and crispy and the pico had a little bite. We both had fish and chips, which were also hot and crispy. Quite tasty. I was a bit leery of the tarragon tartar sauce, since I’m not a fan of tarragon, but it wasn’t overpowering. The kale slaw almost stole the show. It had a spicy kick and was really good. Service was good also. Desserts sounded interesting, but we were too full.

Interlochen is average for a Michigan state park and that’s still pretty good. It’s a pretty typical Michigan state park with campsites on lots of loops, with lots of trees. We camped three nights on site #15, North campground. Right on the bluff with a beautiful view over Duck Lake. Easy access to the boat launch for kayaking on Duck Lake. Camping was $29 per night, with a Recreation Passport (aka park pass) required. Reservations and Recreation Passports are available at the Michigan DNR website. You can also purchase the Passport at the park.

There’s a good-sized grocery store right up the road from the state park. A party store in between offers good deals on firewood. There are a few dining options in Interlochen itself. For a much wider variety of dining options, Traverse City is about 15 miles or 30 minutes away.

Cicero's

Read More
More of a takeout-and-delivery-place. They did have a couple of tables inside and we opted to eat in. It wasn't fabulous, but it was pretty good, minus the canned mushrooms.
North Peak Brewing

Read More
The quesadilla was hot and crispy and the pico had a little bite. We both had fish and chips, which were also hot and crispy. The kale slaw almost stole the show. It had a spicy kick and was really good.
Previous
Next

There is no public transportation in the area. We were pulling our trailer so we had our own vehicle.