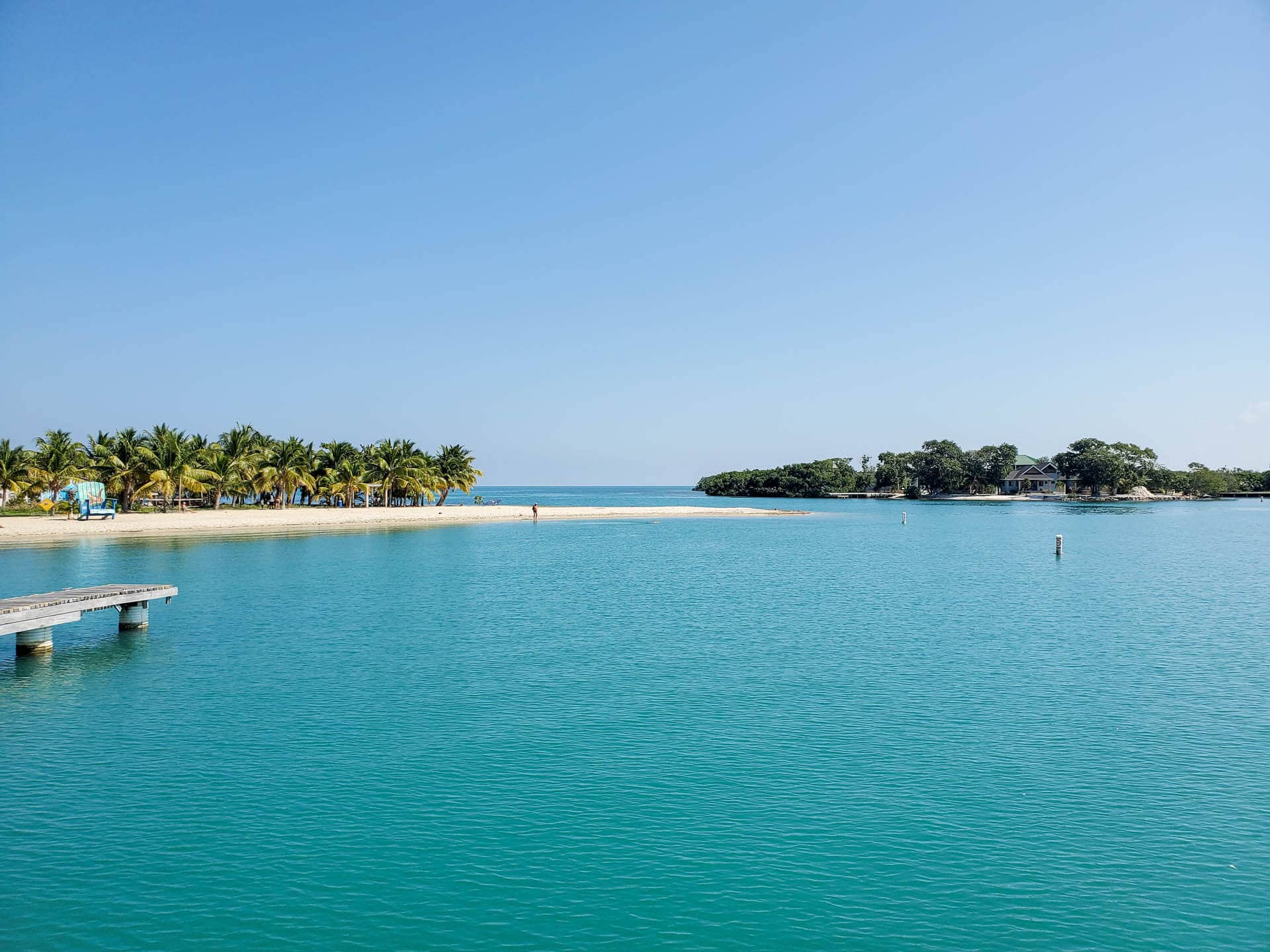 We thought Caye Caulker was laid back until we got to Placencia. Placencia is if anything even more sleepy than Caye Caulker. There seemed to be more tourist-oriented stores here. The crowd here trended older than the Caye Caulker, and the restaurants more mainstream.

Our trip to Placencia began with another example of life in Belize. We’d arranged a shuttle to drive us from the ferry in Belize City to Placencia so we could see some of the countryside on the way. Our shuttle driver was a little late. Once the local taxi drivers who were hanging around the ferry station realized we were waiting for a shuttle, they asked who we were waiting for and reassured the obviously nervous tourists that yes, he would be there. It’s Belize and no one is on time. Just look for the big white van and the yellow shirt.

The shuttle ended up working better even than we hoped. Troy told us about the country along the way. We’d heard the Hummingbird Highway was beautiful and it was, with tropical mountains in the background and agriculture in the foreground. There is very little in between towns. Some small villages with maybe a store or restaurant. Belize is famous for speed bumps, some of them well marked and some not. Lots of people take advantage of them to sell coconut oil, fruits and veg, cashews, and other items to passing vehicles. Smart. There’s very little traffic on the roads so it doesn’t get in the way. Once we got near Placencia things got pretty posh. We even saw our first moated community!

After checking in at Placencia Villas we immediately headed to Wendy’s Restaurant (not THAT Wendy’s) for lunch because we were hungry and it was close. We had quesadillas on the porch. We then hit the store to stock up on beer and walked over to the Tipsy Tuna for drinks along the beach. 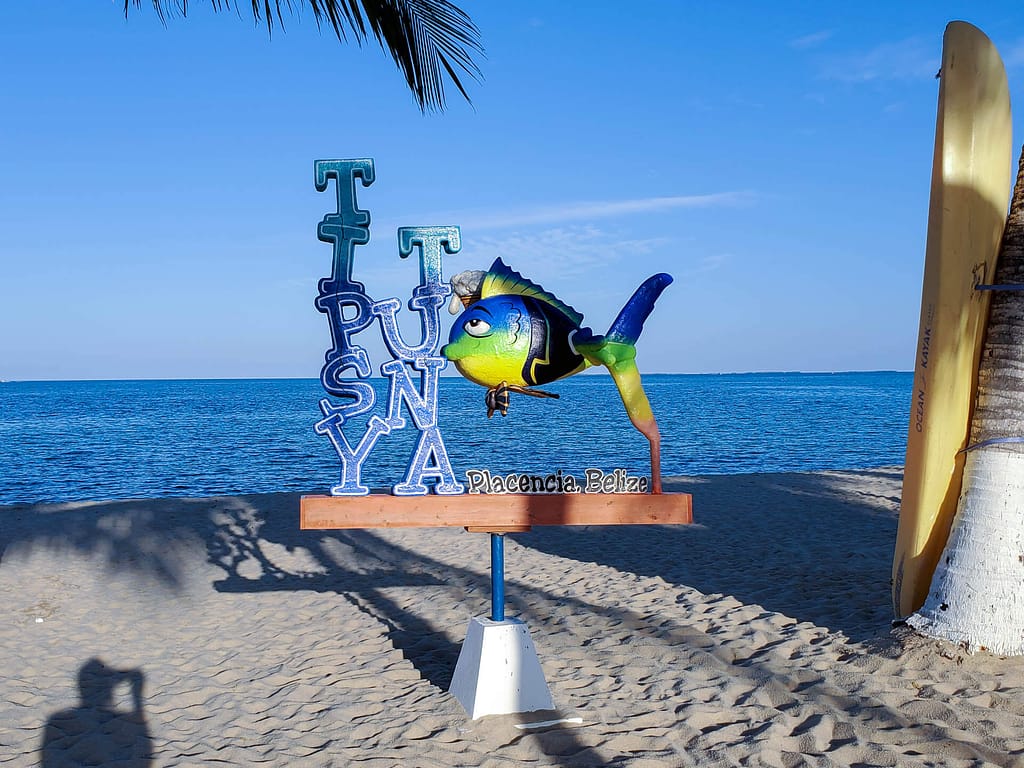 We had a serene and scrumptious dinner at the Secret Garden.

We headed to Friends for breakfast but it was closed — permanently, we discovered — so we went to The Shak Beach Cafe instead. Then we spent some time exploring the beach. The beach is long and clean and the water is clear. The sand is fairly coarse. It was HOT while we were there, which didn’t encourage beach walking. 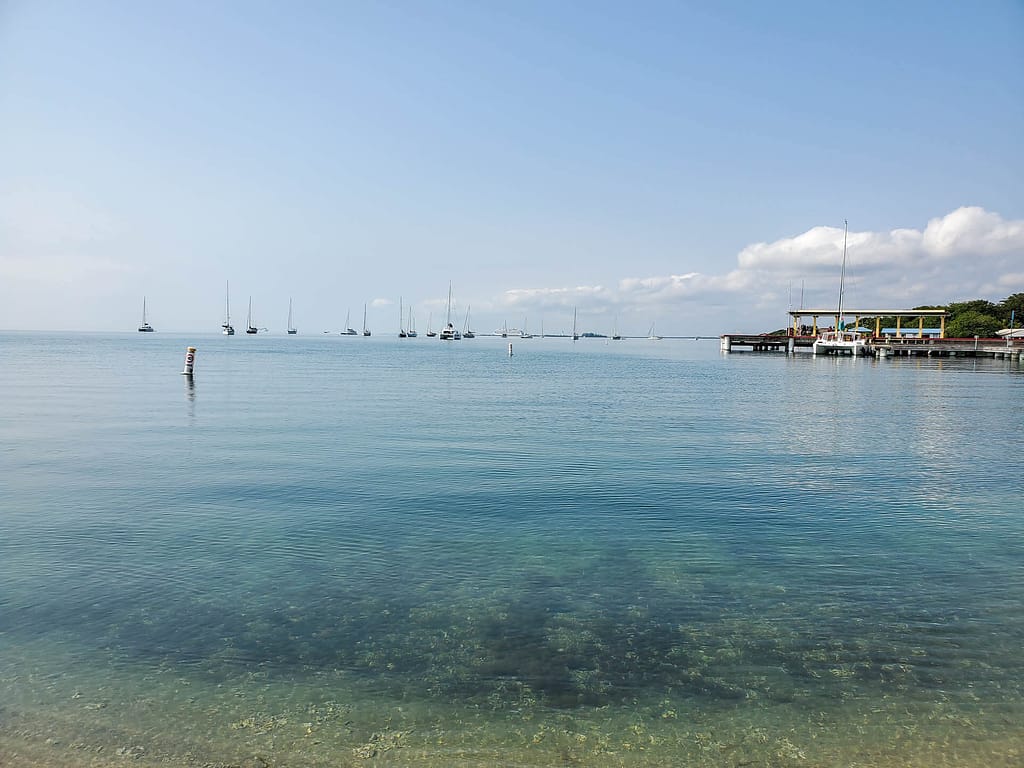 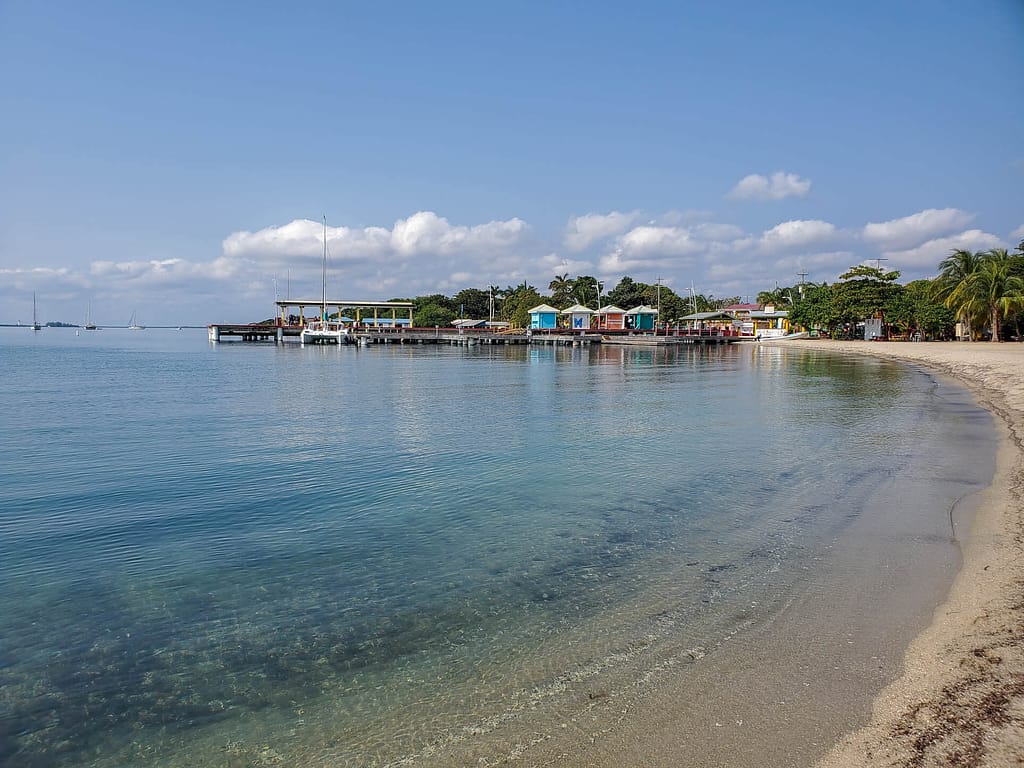 The area near the pier was recommended for swimming because the water is calmer, so we headed there first. We saw an eagle ray, a jellyfish, and a starfish or two from the pier and beach.

We went back to Wendy’s for lunch, then made our way to the Barefoot Beach Bar for drinks on the beach. It’s right next to the Tipsy Tuna and the seating areas blend.

Dinner was pizza at Cha Chi’s right next door to where we stayed. We’d heard the loud music the night before. Thankfully it was NOT loud the night we ate there.

Day 3: Back to the Beach Bar

Once again we had breakfast at The Shak Beach Cafe. For some reason it was super slow so they even gave us more coffee while we waited. (Free refills on coffee are not the norm in Belize.)

We decided to try lunch at the Barefoot Beach Bar. I had salbutes, which are kind of a puffy rustic corn tostada with toppings. I had chicken. They were good and super filling. I couldn’t finish them.

We planned to do another snorkel trip while we were in Placencia but most of the trips were to Silk Caye. Having been through the rough ride out to Tobacco Caye we didn’t want to do something similar just to go snorkeling for the day so we ended up skipping it. We found out from others who went that the water was pretty calm and it probably would have been fine, but oh well. We also saw our first cruise boats of the trip here. Two of them anchored offshore.

We went to Dawn’s Grill dinner. A dog and cat tried to crash the place and made for some brief entertainment.

Our nighttime entertainment centered on the courtyard around which the Placencia Villas are built. We had bats and raccoons visit every night. The bats went after bugs, which we appreciated. The raccoons went after the cats’ food and water. They were both fun to watch.

Day 4: A Long Walk on the Sidewalk

After our long wait yesterday at The Shak we tried Wendy’s pancakes for breakfast.

Then we actually tried some real exercise. We went for a long walk on the Sidewalk to check out another place we had considered staying at. It was HOT. One of those cases where you’re torn about slogging back and forth across the hot sand to get in the cool water. And whether you want to go through the extra effort to walk in the sand along the water.

We ended up back at the Barefoot Beach Bar for late lunch and drinks. We also bought banana bread from a beach vendor for breakfast the following day. We really enjoyed the fun atmosphere at the Barefoot and the fact that you never waited long for a refill.

Breakfast this morning was coffee from Above Grounds with the banana bread we bought yesterday. We spent some time at the beach in the morning as usual, then went to Cozy Corner for a change of pace. It’s quieter than the other beach bars and the food is a cut above. After lunch we moved to their sun loungers down at the water and had a couple of beers.

Placencia has several gift and craft shops along the sidewalk. We wanted another Christmas ornament from our trip — we’d bought a little Tapir Crossing sign at the Belize Zoo earlier in the trip — so we browsed the shops until we found a small wooden ray carving. It seemed appropriate since we’ve seen so many rays on this trip.

For dinner, we headed to Rick’s Cafe for pasta. It was fun to sit at the railing and watch the street life and the basketball in the park across the road.

Day 6: Drinks in the Water

We gave the Shak Beach Cafe one last visit for breakfast which was not as slow as our last trip there. The owner of some villas down by the beach invited us to come hang out down there during the day so we took her up on the offer and went down there to finish up our rum drinks while in the water. That was fun! Then we went to the Cozy Corner for lunch again.

We picked up some fun bottle cozies and a shark bottle opener at the gift shop attached to our villas. Then for our last dinner we went back to the Secret Garden for more tempura grouper.

Day 7: Placencia to DFW, then Home

Our last morning in Belize we had coffee and toast with guava jam from Above Grounds, then got a taxi to the airport in Placencia. It was a short flight to Belize City to catch our flight to Dallas-Fort Worth where we spent the night before catching our final flight back to Michigan.

The photos below are some that we took on our flights within Belize.

Placencia has a decent selection of reasonably priced places to stay. We liked Placencia Villas though if went back I might opt for a place on the water and trade the air conditioning indoors that we didn’t use for the tradewinds outdoors that we would enjoy.

Placencia Villas is not on the beach but nicely positioned for restaurants. It has air conditioning and kitchen facilities that we didn’t use, other than the frig. It was very clean and the staff were quite friendly and helpful. Daily housekeeping wasn’t automatic; they checked in with us to see if we needed anything.

Perhaps fewer restaurants here than on Caye Caulker, though still no shortage of places to eat. Options seemed more mainstream with typical bar food. Then again, we didn’t have time to try them all!

We took a shuttle to Placencia the see some scenery on the way and flew back to Belize City to catch our flight home. Conveniently we were once again able to catch an earlier flight, since American Airlines changed our return to flight to two hours earlier. I was glad I’d built-in lots of time between flights, though I’d planned it that way in case our local flight was late!

One of the main “roads” in Placencia is the Sidewalk, which we thought would be sandy path. It is in fact an actual sidewalk that runs parallel to the beach between it and the main road. Most of the stores and restaurants are on either of those since the peninsula is not that wide. No need for a car or golf cart while there; everything is walkable.​