Selvatura Adventure Park was the first ziplining tour in the world. We chose it over other options because it was the original and we weren’t there for the biggest thrills. (Like we didn’t do the “superman” option pictured above.)

We opted for a combo package that included both ziplining and the hanging bridges, and chose to do the zipline first.

We had a long wait to get started because we were at the back of the last bus. We had a locker for our stuff. The staff does all the strapping on, then there’s a short ride to the starting point. Then what felt like a long hike (in a harness) to the first platform. It’s easy to get the hang of it, though they didn’t mention leaning on the strap or how the auto braking worked. You progress through the ziplines in groups. Our group had five Italians, three mouthy Americans, a couple from Georgia, and a few others. Steve and I were initially separated, then got back together in line later. Some ziplines are shorter, some longer. Some are doubles and some singles. The guides figure out which is which. Steve did the Tarzan swing. And didn’t scream! The last, 1k long zipline was the best.

While the ziplining was fun, we didn’t have much chance to really look around. I tried it once and started rotating so I stopped that! Our guides were businesslike; only one was at all chatty.

Steve was taking it very seriously ...
Steve did the GIANT tarzan swing. About a 100 feet high. (I did not.)
Neither of us did the superman option. Though Steve wished he did.

After the zipline we did the hanging bridges. The couple from Georgia did too, so we ended up talking with them. The hanging bridges gave us a chance to absorb being in the canopy. We ran into people who took forever to take photos. There seems to be at least once of these groups everywhere we go …

That dot in the sky? That’s zipliners, as seen from a hanging bridge. That last run is 450 feet in the air. And one kilometer long. We don’t recommend either the ziplining or the hanging bridges if you have a problem with heights! 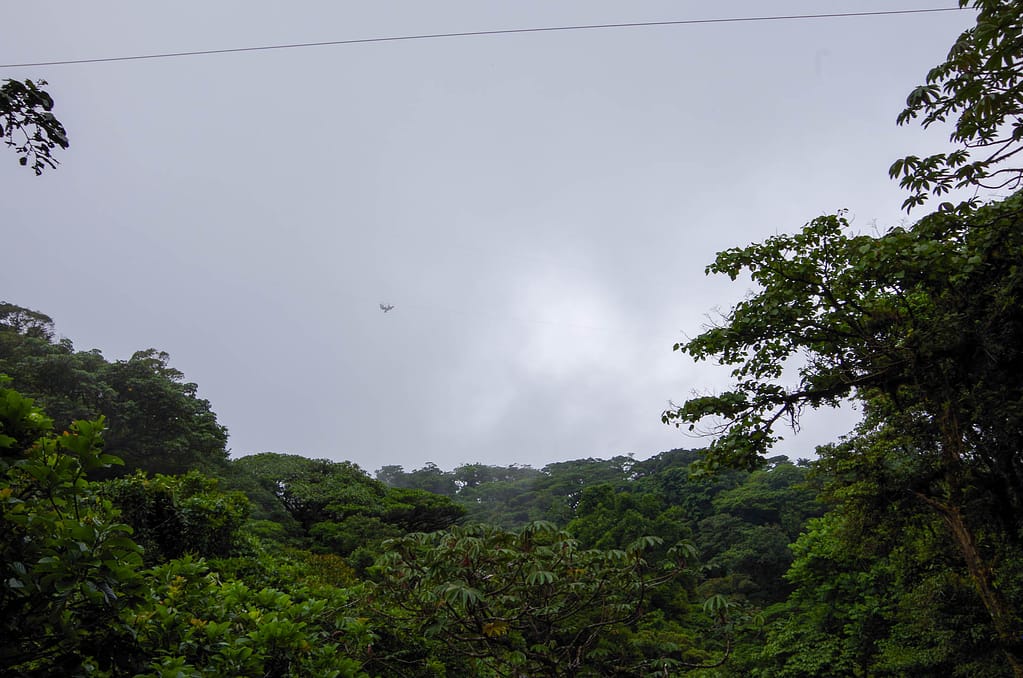